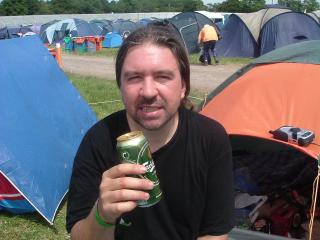 Well that's over for another two years. There was the flood, which only slightly affected us. But it did flood the tent up to - ohh - half an inch in places. Enough actually to make most of clothes damp and to wreck some of our food. Apart from a bit of a row on Friday morning we survived, and managed to have a good time anyway.We also had a couple of kids with us, so had a bit of responsibility. Managed to dump them in the kidz field most of the time, making sure they had a phone to contact us when they wanted out. Before the storm, top left. 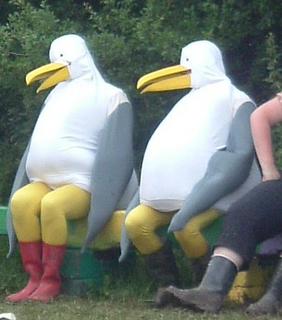 Friday morning was wiped out of course, but in the afternoon wandered round. A lot of the stalls were under water, the music was running late, and my phone was out of action as it filled with water. This prevented my friend K from contacting me as he planned once arriving at the site. It was touch and go for a while, with the rain always threatening to come back, black clouds appearing and the odd bit of thunder. And the rain did keep coming back, preventing things from drying out.

S and I hid in the left field tent watching Cuban bands while I used her phone to try to contact K. We succeeded and went back to the camp site.

Saw Steve Earle - the highlight. Later we managed to see Elvis Costello, and met up with some urban 75 posters at the cider bus.

The early morning saw me and S queueing to get on the ghost train.

Saturday - a better day, still muddy. I went off to see Echo and the Bunnymen at the other stage. It was still very muddy round there, and I was walking with a mutual friend of S and I, slipped and fell in the mud as we walked. I was quick enough to use my arm to stop me going all the way in, and ended up with a muddy arm. Once the mud dried it was like clay, all over my hand. I felt it seizing up. So I used my other hand to work the mud off.

I Met up with K just as I'd managed to get the worst of the mud off, and noticed Hooky from New Order was doing a DJ set in the beer tent. The Bunnymen pretty much did the songs we all wanted to hear. The Cutter, Back of Love, etc. They were pretty wonderful as it happened. Failed to see the Beat - family obligations. Saw a bit of Billy Bragg. Ate a still legal mushroom in the evening and wandered round the site till 3 am. Can't remember much of that, although I know we took in a little cabaret and ate a square pie each.

Sunday and the site was drying out. Spent the day mostly in the circus and theatre bits, but maanged to see New Order and Brian Wilson in the afternoon. Met up with K - a different K - who I hadn;t seen since some time round 98 or 99. He's moved to Dorset with his wife.

Managed to miss Chas and Dave while waiting to get a beer.

Sunday evening - Tori amos in the accoustic tent. she had her Hammond Organ with her. Very impressive! 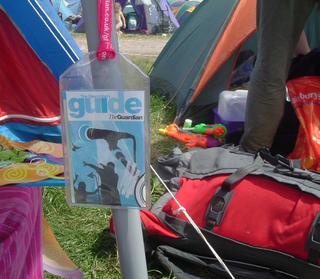 I don't want to think about who I missed - far too many - buts that's what happens when you take kids - we wanted them to have a good time too, and watching the bands we liked wasn't going to give them a good time.

We took shit loads of gear with us. The alternative was spending hundred of squid on take-away food for the kids and ourselves, and a small fortune on beer too. Most of the gear was camping equipment - including a camping stove and pots to cook with. And we ate tinned and dried food - pasta, rice, soup etc. Didn't stop me sampling some of the better food available though - square pie, French sausage (below) and potato, and roast pork with fried potato and gravy. 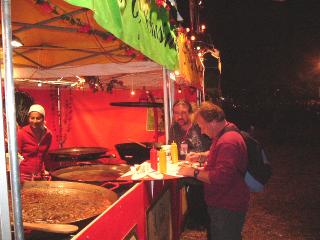