The Bastards Won't Give Up

They've been told to stop harrassing photographers but London's police are a law unto themselves.

Read this article from the Independent

Forget the communist bloc, China, Libya, Saddam's Iraq, North Korea - human rights are being violated every day in the UK - by the UK's own police force.

This footage is brilliant - they accuse the photographer of everything from pedaephilia to being an agitator and a terrorist threat to the military parade, and finally after they've tried taking his camera away and used threats to make him leave the area, they push him down some stairs and finally arrest him for breach of the peace. It's fucking marvellous and shows what ignorant thugs the Met police really are. Well done the photographer - only young - for knowing his rights and standing his ground.
No comments:

To Do or die

My To Do list has become my personal albatross. I have now got very good at capturing everything I think of - things I need to, things I'd like to do, things I have thought of that may or may not be possible or worth having a go at. I use this laptop - the excellent post it note programme - so I've got 40 or 50 virtual post it notes stuck on my screen; I use a voice recorder in case I think of anything while on my bike; and any scribbled notes i make eventually find their way to the top of the pile to be typed onto a virtual post it note, or website favourites, or whatever other way I can store my intent without actually getting anything done. Now I have such a mountain of these notes I have to prioritise - so there's a "I have to do today" list, and "things i'd like to do" list, and "a next month when I get paid" list, etc. As well as that - books I want to read, films to see, records to buy, etc. etc.
Since I've been using Twitter I now have a list of Tweets I need to go back and check out, and my bookmark file is huge, I have hundreds of pdfs downloaded from Guardian stories i'm interested in, a hard drive full of scanned notes and articles.
In the words of Morrissey - something is squeezing my skull - and yes it is being squeezed by the weight of failed intentions, and guilt of good ideas going unrealised, books and articles left unread and fear that my cultural life is more mediocre than it should be & by the discrepency between what i intend to do and what i actually get done - in short that I am failing as a 21st Century human being. This gap my intention deficit, if you like - it is already big , and getting bigger....the true malaise of the modern world as we have systematically thrown out the filters of the media and the critic, and the retailer and taken on board the gargantuan task of sifting through all incoming data ourselves. Oh for the days of just sitting down in front of C4 News once a day, having the NME decide my music shopping list for me, letting the local flea-pit decide what films I see, my boss decide my work-load, the shoe-box under the bed being the only repository for my meagre collection of non-digital photo prints, and only having my diary to write in, with noone to read it.
No comments:

This Week (only partially complete) 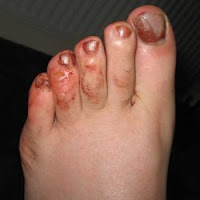 I started the week exhausted. Attempting to run 10km round London fields in a dress and tights on Saturday left me knocked sideways. For someone who hasn't run for about 15 years it was probably a foolhardy challenge to take-up. In the end I just ran the bits where there were lots of spectators, and, confidentially, didn't go the whole distance. I ducked out a couple of laps short - my feet felt absolutely awful. Click on the thumbnail to the left here with caution - but it does show well what I cannot adequately describe. I ended up hobbling home after drinking in the pub until 9pm.
Sunday was recovery day - I could barely walk - and Monday - well I could barely walk then either but my cycling muscles appeared not to have been particularly stretched...and pushing pedals was the one thing I could do with my feet without causing excrutiating pain. I was hobbling about in th office in just socks for most of the afternoon.
The I found out that poor old Frank Sidebottom had died, which put an instant downer on the week....there was that awful and vindictive budget designed to rob the poor to pay the bankers..the week went downhill from there.
Wednesday I had to call the police on a couple of chavs (not a nice word but it surely applies in this case) who tried to run me down in their white van and then threatened violence upon me; Thursday I took the details of a Sainsburys lorry in Charlton which nearly took me out after not respecting my right of way, and finally later I was nearly taken out by a suited gentleman driving at me on the wrong side of the road in Holborn. My friend P had a friend die on Wednesday in a car crash and a collegue hospitalised on Tuesday in a separate crash.
And it's been hot - I don't do well in this sort of heat. Haven't slept well, felt uncomfortbale at work; but on the positive side I appear to have lost a bit of weight.
Friday I was so exhausted I fell asleep watching "8 legged Freaks" at 6 in the afternoon, and again later watching Mighty Boosh extras. I must have slept for about 14 hours in all.
(picture on right --> not at all related to post, but topical)
No comments:

Frank Sidebottom is Dead, oh yes he is, he really is.

It is with absolute shock that I report the death Britain's greatest ever papier-mache-head-based comedian/musician. 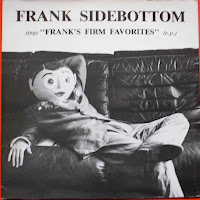 I first became aware of his work in 1985 - a session for Radio One and the release of his first ep. Then the sci-fi ep at Christmas.
I still have my copy of Frank's firm favourites, and it still makes me laugh. Actually Frank was a bit of a git - selfish, lazy and arrogant at times; he had a fearsome temper especially when Little Frank was around; and god knows what he was doing still living with his mum at his age. but through it all he managed to produce unique versions of classic songs especially ones about space and sci fi.
Who can forget his moving version of "Life On Mars" - about the girl with a mouse in her hair - or his better than the original version of "Bohemian Rhapsody". ..better mainly becasue he managed to do the whole thing in less than 2 minutes.
In the 90s I saw him many times at festivals where I think he found a niche filling in for last minute cancellations, which is I think why I ended up seeing him three days running at the 1993 Reading Festival.

His career ground to a halt soon after that - i think it may have been over-exposure. However the last few years saw a comeback, and a new tv show, and for the first time the beginnings of widespread recognition thanks to his now famous former cohorts - Mark Radcliffe, Jon Ronson and Mrs Merton.
He once sang that he didn;t want to die and end up like Anita Dobson. Unfortunately that has now happened. Chris Sievey, the man inside the papier mache head; I hope you rest in peace, oh yes I do, I really do. Thankyou.
Click Here for Radio Timperly
No comments:

This is me on the left - in my outfit before turning up at the first ever Great Drag Race on London fields, Hackney, for Prostate Cancer Research.
My look - a black dress from Asda, yellow coat from Sainsbury and lacey tights from somewhere else. I turned up "in costume" which was fun - I had one bloke giving me a funny look and practically turned white when I said "right mate" to him.
Though not in the picture I wore black high heel boots to begin with - and they absolutely killed my feet - I can hardly walk now. Then I ran - which made things worse.
This is the world record attempt at dancing in drag - look, you can see me - trying to follow the actions in my own hapless way. I believe that we doubled the old record. but I'm awaiting confirmaiton on that. 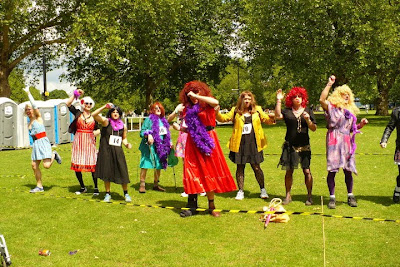 Lads turned up en masse - over a hundred and fifty - wearing ladies' clobber: 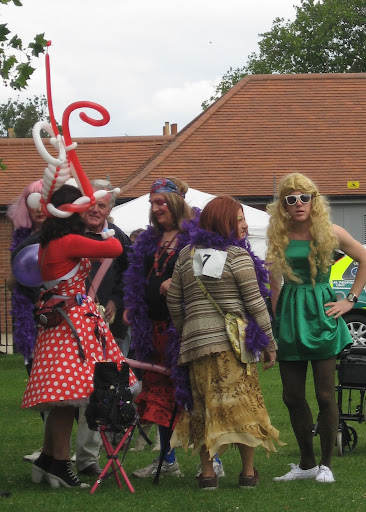 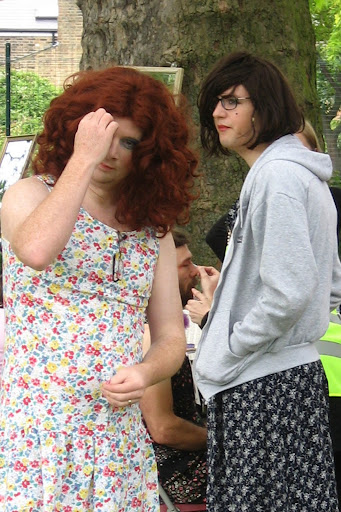 Tamar Bridge and my Dad

Built in late 50s/ early 60s linking Plymouth and Saltash in Cornwall. These pictures and over a hundred more, were in my Dad's archive - they are a unique record of Plymouth's iconic bridge being constructed and those who worked on it/ 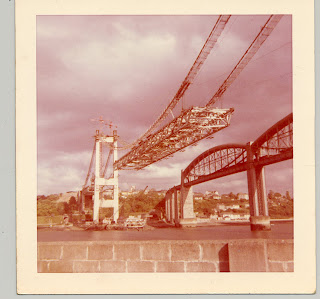 Unfortunately - the age of the photos mean that the colour has deteriotrated. 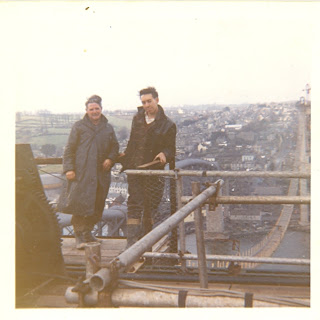 My Dad on the right. Aged about 18/ 19 here - one of his first ever jobs as an electrician. 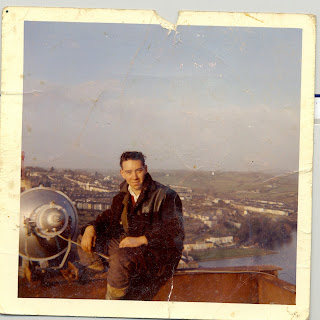 Again - my Dad several years before I was born. 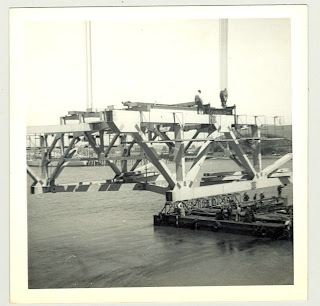 Construction in process
No comments:

My own feelings are exactly as Terry Nutkins says below (there, I never thought I'd ever be publishing those words!). Foxes do not attack people - so what the feck happened? Years ago when I lived in colliers Wood I regularly discovered that my cats were happily intermingling with the foxes who lived at the bottom of my garden. They never ever attempted to approach me, my wife or my young step daughter when she was left alone in the garden. I once even saw a fox back away when confronted by a kitten. So - the question again - what the feck REALLY happened? This, unfortunately, can only be bad for foxes. Foxes are treating urban areas as their territory. They don’t differentiate between concrete and a tree, as both are part of their habitat. They are carnivores and opportunist feeders, but they don’t attack humans. I can’t remember a single verified...read more...
Tech Tags: The Guardian newspaper NATIONAL

What is With East London and Foxes? 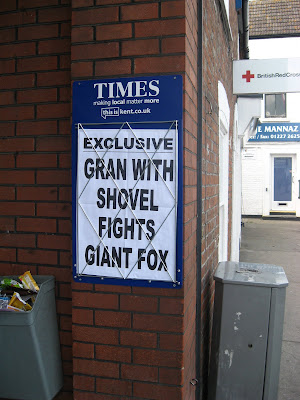 Got Dragged into This...

The great drag race - it's to raise money for prostate cancer awareness and research.
Here's an artist's impression of how I'll look on the day.
Click on the link above if you wish to make a donation. Cheers!! 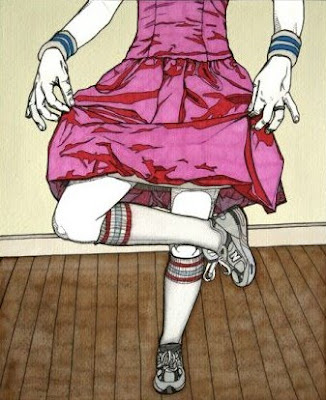 A group of marine scientists at Brazil’s Guaruja Aquarium attached a plastic window to a shark’s egg so as to better observe the development of the embryo inside. A pretty astounding clip of the little swimmer follows below (and for those of you concerned about such things, the shark remained unaffected by the window):
No comments: