There are sirens going off all over central London again because of this car bomb found in piccadilly circus this morning. Park Lane's been closed off now. So Brown's celebrating his new job by boosting the war on terror. I'm sure these bombs are bogus, its a well known, tried and tested method for frightening the population. Brown is not going to let off our slide into fascism. ID cards, DNA database, extra police, new stop and search powers, CCTV everywhere. And conveniently placed bombs to justify the removal of our rights.

This man was making a god-awful racket first thing this morning. These blowers are a real fucking nuisance. What's wrong with an old fashioned broom? they wake me up and stop me from thinking about anything but the bloody noise, while I'm trying to get ready for work, have breakfast, and start the day in some sort of decent framje of mind. No chance!! 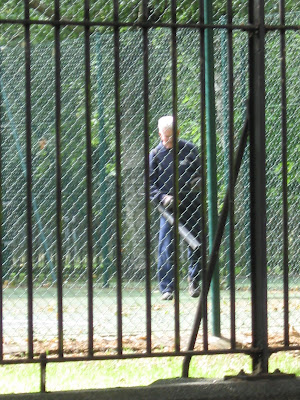 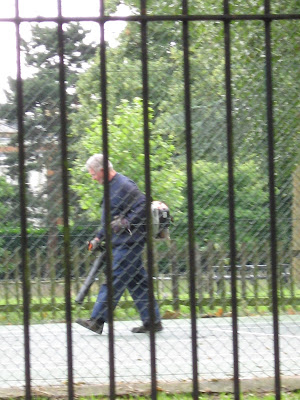 Sooo tired. I've not had a good night's sleep for over a week. Late nights, early mornings. I have a tendency to stay up late anyway, but with all the good telly being on at midnight, and with me working late quite a lot now, I'm rarely in bed before 12.00, sometimes after 1.00 am, which might sound lame to you, but is a big deal if you have to be up for work at 7.00 every day.

I need my sleep. so I laid in a bit this morning. Still feel like crap though. Roll on Sunday.

The breakfast programme on 6music has been good this week, Gideon Coe has been presenting it instead of Shaun Keaveny. I was very upset when Phil Jupitos packed in doing it and sulked for weeks. I've just started listening again. But Keaveny's back again next week. I'm kind of getting used to him now, but it'll never be as good as Phil Jupitus. Keaveny doesn't play the range of different types of music that Jupitus did. He pretty much sticks to Indie classics and the playlist. Jupitus played everything, ska, reggae, dance, folk music, old classics, jazz, country, the lot.

The girl who served me in Tesco today was called Sultana.
The latest picture showing cycle lane misuse. I've noticed that the police cycle on the pavement and ride horses on the cycle lane. I was forced to take an illegal alternative route the wrong way up a one-way road.
Vauxhall Bridge - this may be the outlet of the River Effra - maybe. 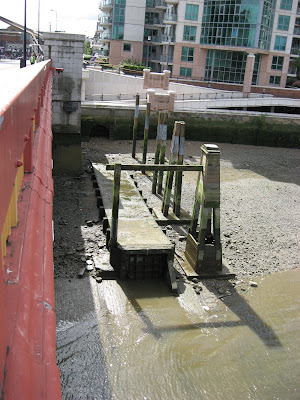 I'd never really noticed this statue before. Funny place to put it: 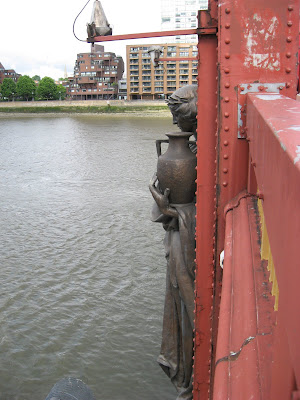 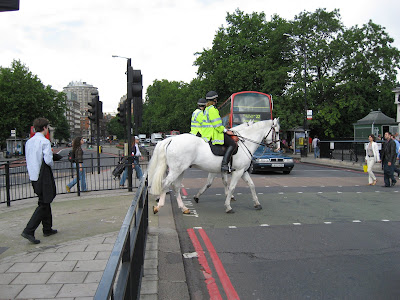 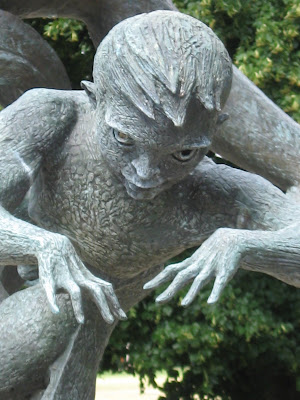 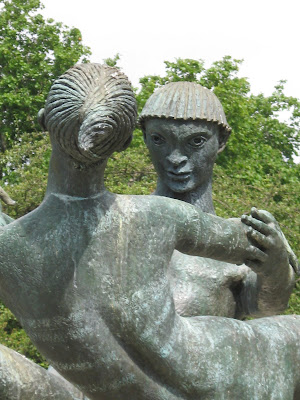 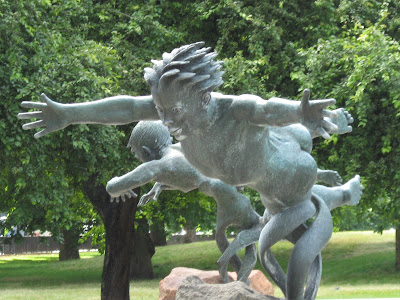 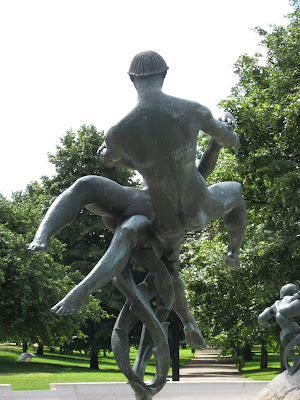 Chips Shops I Have Known: a new feature
I stopped to have chips here during the peak of the rain last night. It's in New Cross. They do small medium and large chips, and curry sauce. The chips were good, not anything special, but it was a stingey portion even for small. the curry sauce, again, good, I've had worse, I've had better. No sultanas in it thankfully. 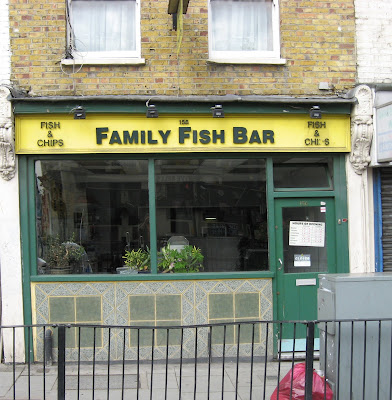 This is the cab that hooted me out of the way this morning - I was cycling about as far left as you can get without hitting the kerb. After the hoots I moved out a bit and then held my ground. He passed me anyway, putting me in a very dodgy position for quite a while, going along Marylebone Road. I've reported him to the licensed taxi people. 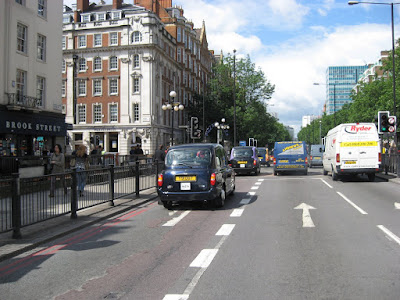 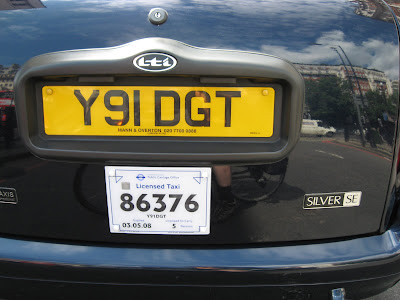 Near Northumberland Park - there's a bit of a cycle netwrok up there - doesn;t look heavily used though: 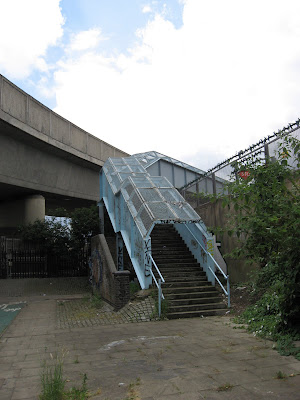 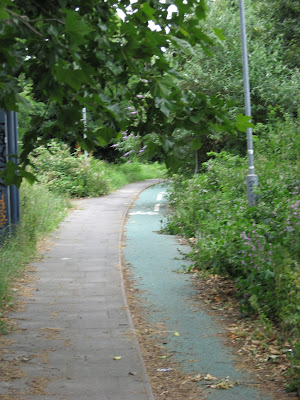 I was quite smug about the weather - huge parts of country flooded, all of it up north. Sheffield was particularly hit, alhtough my friend Andy who lives there reckons he barely noticed, except for what he saw on the news.

Then yesterday we got very heavy rain. but it wasn't like they had up north. I got very wet cycling home, which isn;t really a problem.

Today - sun's out again, but we've got severe weather warnings for the weekend, not in London though, I don;t think.
No comments:

I spent the weekend with S. We went for a look round Camberwell on Saturday - it's the arts festival - although we didn;t see much.

Sunday - Cuban festival in southwark Park. Again, not great. One stage of music that I wasn't very into - and a hundred stalls for Salsa holidays in Cuba.

The pictures I took are of the most important thing at any festival - that is if you're not drinking, which we're not; not together anyway. 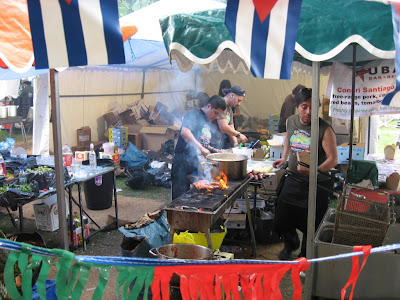 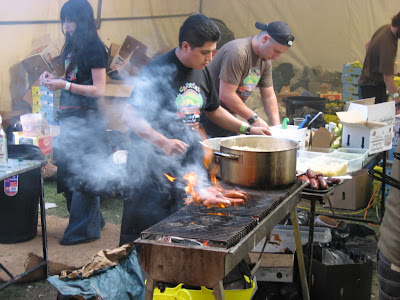 Look at those Chorizos!!

We did have some nice food though. Despite not drinking we tried to buy a mojita - they sold out while we were in the queue. So we still didn't drink. 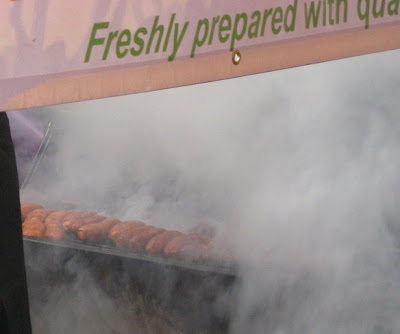 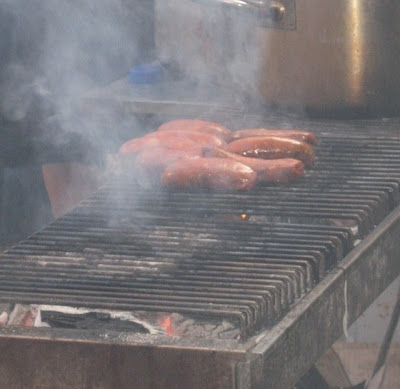 Hee hee - look at this (below) from TNT Magazine. This guide for Aussie and Kiwi travellers reckon that the country we know as France, is actually called spain. I'm most impressed by the fact that they labelled up Madrid, Bunol and Valencia, and still noone noticed!! Unless it was done for a bet. 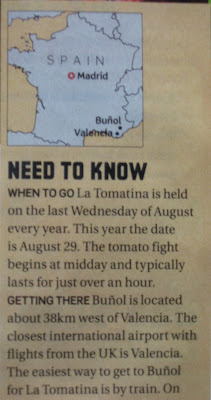 Photos with my New camera 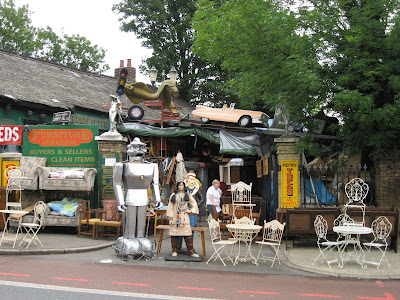 My company have bought me a digital camera. It's not bad you know. Here's a bit of London I pass through most days: Loampit Hill. This is a junk yard that's been here for years - as far back as I can remember. The stuff they have out on the pavement is never disapointing. 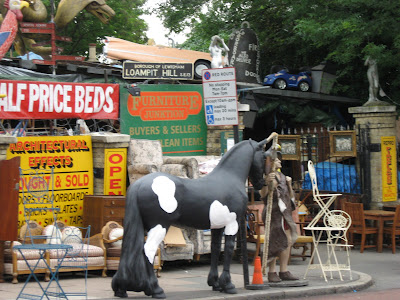 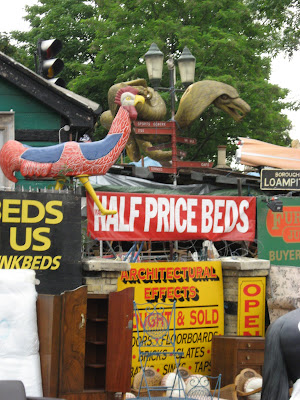 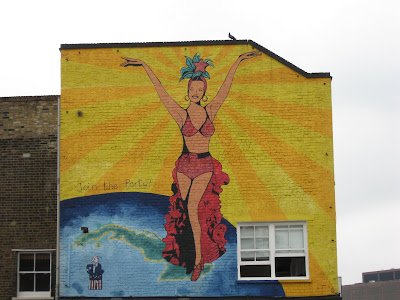 A cuban bar in waterloo - note the Uncle Sam figure looking very pissed off in the corner. Close up below: 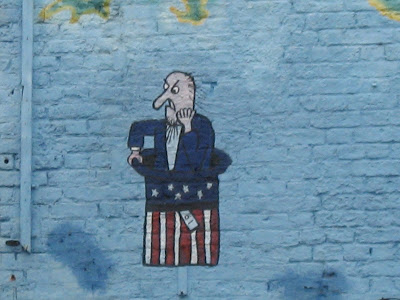 I seem to have dried up a bit on this blog. The options are rant about politics, go on about cycling, or post up endless trivia. I prefer to keep things political, but things have been so bad recently I've found it all far too depressing. So I'm going down the trivia route. Strangely enough, I've been watching Big Brother in the past two weeks. It confirms all the negative feelings I have about young women. What a bunch of spoilt brats.

I've got a new wheel on my bike - the old one kept popping spokes, 7 in total last friday. I was in imminent danger of ending up on my ass. I reckon I can get from home to central London (Baker street) in around 75 minutes.

Finished "Complicated Shadows" an Elvis Costello biog. I enjoyed it. As always though, there's the feeling that it didn't delve deep enough for the true fan - as I am - especially the last ten years; it leapt from one reocrd to the next, via tours and marriage break-ups. I don't think he got close to anyone who is currently part of the Costello camp, therefore he covered the attraction years in much more depth. Maybe he should have stuck to this era, and done it in more detail.

I think what comes out of this clearly is EC's massive ego. Those who have fallen by the wayside all cite it as both what attracted them to him and what drove them mad when with him, either as a colleague, a friend or a lover.

I've been listening to his records, and reassessing, although I haven't changed my views much.

I'm not keen on his ego boosting dabblings - Brodsky Quartet is OK, the Sofie von wotserface record is rubbish, etc. He's much better with a "beat" group.
No comments:

Since I have a new camera - a Canon Powershot A550 - I've taken some new shots of my cats.

I've been watching the stuff about kid's tv on BBC4 this week. So it was appropriate that I saw Keith Chegwin nearly getting hit by a car on Tottenham court Road this week. I thought he'd be interviewed at some point in the series, which would explain his presence in that par tof London, but he did not appear.
There were a lot of ommissions in the series, even among my favourites, plenty of programmes just got ignored: 'Mary Mungo and Midge', 'The Herbs', 'Henry's Cat', 'Ludwig', 'Hector's House', 'Paddington Bear', 'Will O the Wisp', etc. Did 'Magpie' get ignored because it was ITV's challenge to the untouchable Blue Peter?
No comments:

Email ThisBlogThis!Share to TwitterShare to FacebookShare to Pinterest
I haven't blogged for ages. My work became very demanding with certain documents desperately overdue, and being my responsibility, I had to put a lot of effort in to get them out on time. My personal life has gone into meltdown. S and I cannot be in each other's company at the moment.
On the brighter side, I've been learning Spanish. I had my 6th class yesterday, so far we've done introductions, ordering food, telling the time, counting, jobs, etc. I missed two due to ill health and a Patti Smith concert. Patti Smith is not an artist I'm particularly fond of, so when a friedn asked if I wanted to buy his extra ticket to see her at Camden Roundhouse, I nearly said no. And then I thought, if I go I have at least seen this iconic artist, albeit not at the leak of her career. However, she was mush better than I expected. Her voise hasn't changed. Her band were excellent. She did improved versions of her hits, or well-known songs, and quite reasonable covers from her latest album. The Tears For Fears cover was crap, and so was her version of a Beatles song, but I can forgive a couple of lapses from the otherwise very high standard. She was very chatty too - telling jokes - I didn;t realise she had a sense of humour.

Wilco were anything but chatty when I saw them at Shepherd's bush last week. But they can play better than any band I've ever seen, with high quality songs to match. It was one of the top 5 gigs I've ever seen. I said that last week, and stand by it now.
No comments: