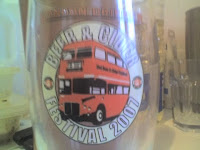 The London Beer Festival in the Camden Centre has started. S and I went down there yesterday afternoon. We both ate a pasty to line our stomachs and then queued to get in. It was free - lunchtime, 12 to 3pm. Once in we got our half pint glasses and headed straight for the beer. A slightly disapointing stout to begin, and then I went for a lighter beer with overtones of pineapple, a stout that tasted of coffee, a bitter from Devon, a German smoky beer, and an English porter.
We also managed to have a dish of honeyed pork and mash each. I bought 8 pints of cider, both French and Devon, and we bought an assortment of German and Dutch beers too.
Smashed, we headed home. I was on my bike. 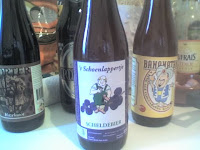 Right away a couple of pip-squeaks pulled over to harrass me. I was in the middle lane and signalled left to change lane, changed lane, and continued to a stop line at a red light. That is when they pulled up alongisde me.
They'd seen me change lane, as I had seen them. They were so far behind me that I considered it safe to change lane. and it was. I got to the lights before them, and they were slowing down anyway. I reckon we were going the same speed. They said "For a start, you're not wearing a helmet." I told them I didn;t need to. For a bloody start!! I didn't want to hear about what they had to say to be honest. They perceived my changing lanes on a busy dual carriageway as dangerous. Only dangerous if the wankers driving cars fail to act on my clear signals.
Then the bloke in the lorry behind wanted to have a go, and I told him to fuck off. And another bloke leaned out of his lorry and said "You wanna calm down." I shouted "FUCK OFF". Why do these twats get involved anyway? Is it just a sport to have a go at a cyclist? If everyone had left me alone then there would have been no problems.
Then a bus forced me onto the wrong side of the road. I've put a complaint in to the company, no reply yet. 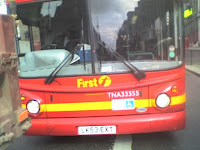 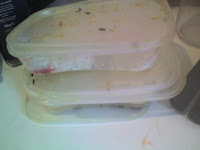 i sent this in to danny baker. It got read out and provoked a small amount of hilarity from amy too - she thought the eminem lyric was silly, as do I.

apologies if you've already done these, i came in late.

Ian Dury And The Blockheads - Dance Of The Crackpots

"floating around orange and mustard planets. I can see huge tiger striped fishes chasing tiny blue and yellow dashes, all tails and fins and bubbles"

this is funny
No comments:

Flamenco Express - Sunday night excellent Flamenco group
As a result we went back to the same venue - The Amersham Arms in New Cross - to see their comedy night. It's called Happy Monday. The comedians were ....... Goldsmith, Ginger & Black, ............, and Russell Kane.
Russell Kane was great.
I'm still working hard, I've carried out 4 envrionmental audits, met someone from the LCC to set up some pro-cycling initiatives, put in place a load of documentation, set up a regular environmental meeting for guys from across the business to deal with their issues.
I'm booked on Spanish language course from April.
Me & S are both going to be doing the Dunwich Dynamo this year.
No comments:

I was at the Borderline on Saturday to see a line up organised by someone called "Howdy Do?". It cost £7 to get in, which is why I was there. No one I knew could go - or wanted to go - so that's why I was there by myself.

I was a bit depressed, for reasons I won;t go into, so I nearly didn;t go. I nearly left early once I was in. The first band, Noah and The Whale, looked like they were still at school. Three boys and one girl. The singer was clearly some sort of protoge, and I expect him to succeed at some point, though perhaps not with this band. There was a drummer, the girl sang and played what I think was a harmonica, and the other boy was a guitarist. They did this sort of Decemberist/ literal type music, quite folky, and moved into Nightingales style indie country. The last song "It comforts me" was the most upbeat, in an Americana vein, though I thought the lyrical content let it down.

Jay Jay & The Pistolets comprised of one man and an accousitc guitar. He seemed quite angst, sang in a kind of contrived whining voice, and berated the audience for talking through his songs in a pathetically ineffectual manner. He called the audience "rude". Well that told them.

Peter and the Wolf were the first band with a record out. They were Doves/ Magic Numbers sort of thing, Scottish, as far as I could tell, and they had a rather tasty drummer.

Finally Piney Gir came on. I was glad I stayed. I should have twigged who they were, but didn't until way into the set. She'd been on Phil Jupitus in the week and I resolved to check her out at some point. She even mentioned that she'd be in the Borderline failry soon, and I thought vaguely about going. When I received the email on thursday about this gig, though, I'd forgotten about that. I only went cos I was at a loose end and the gig was very cheap.