Ah - you thought I'd forgotten about my commitment to my Blog! Think again! My commitment is now for a daily entry - although only Monday to Friday ... and maybe not every day.

I've still not shaken off this cold - you'll recognise me riding my bike this week - I'm the one with a constant cough and persistent sniffing. It's horrible.

I saw the President of France yesterday. He was in a limo heading towards Downing Street. I didn't know what he looked like, or his wife, but it was fairly obvious who'd be ferried in a huge motorcade with police escort towards Whitehall. Then I checked on the BBC website and yes - it was him.

Ha ha to Heathrow T5 for suffering at least two setbacks this week. First off they've had to back off with their intention to fingerprint everyone passing through due to "misgivings" and secondly, the operation has descended into absolute chaos leading to poor press and massive numbers of customer complaints.

Critical Mass tonight - since my Bikes Not Bombs ride over Easter I'm hoping to be able to say hi to some of the people I met.

Speaking of which - here's some piccies. At the start, a huddle was formed to decide the plan, the first of many huddles in the next three days: 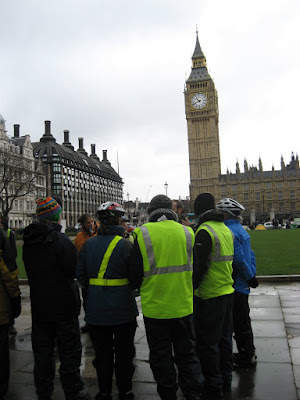 Before we left London we joined up with the Free Tibet march in London.
http://www.freetibet.org/
Then a premature lunch stop in Hyde Park where I managed to buy a coffee. My bike with Roy's bike (with flag): 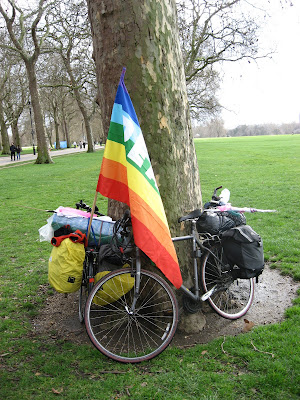 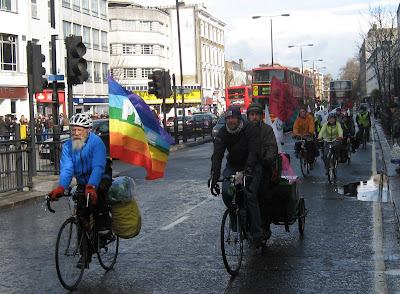 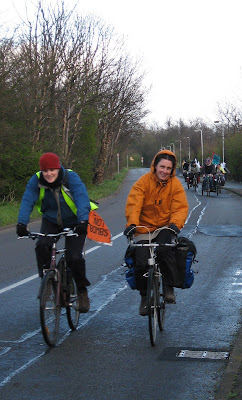 Stopping for the night at a Sikh temple in Slough: 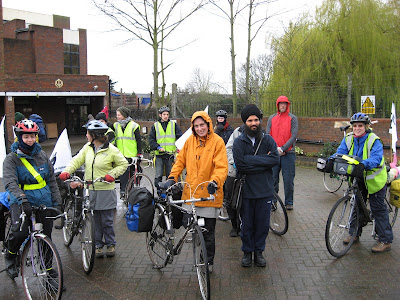 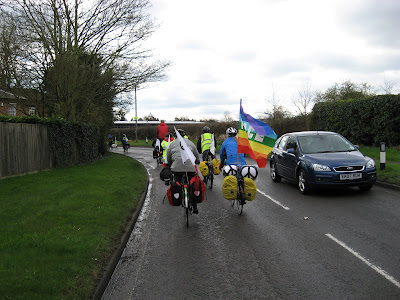 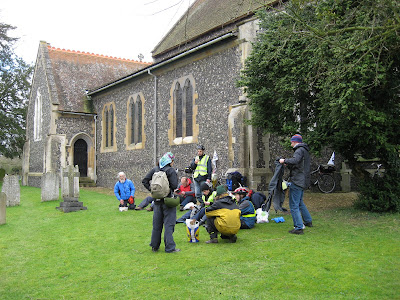 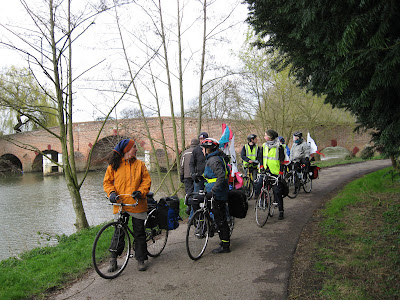 Around Roundabouts in Industrial Estates: 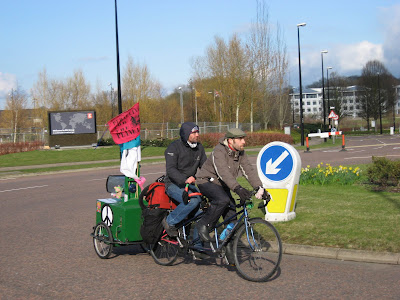 In Reading we were Deemed a threat to the railways: 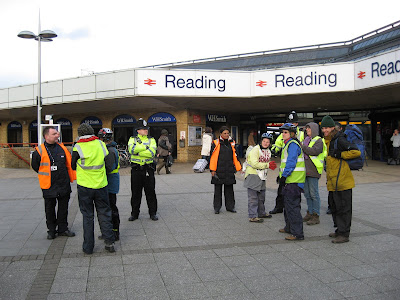 Finally we made Aldermaston: 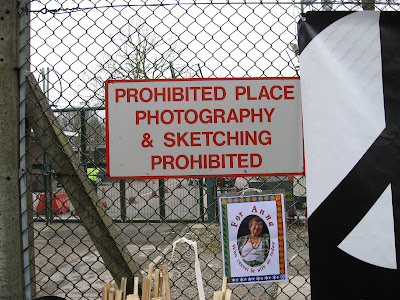 It's the Oxford Cambridge boat race this weekend - I'm not interested, but you might be. Putney to Mortlake, River Thames, 5.15 tomorrow.

http://www.theboatrace.org/ - for a list of all the pubs en route.


I'd like to say hello to the flower girl near where I work, this is her having a sneaky can of Guiness while working. 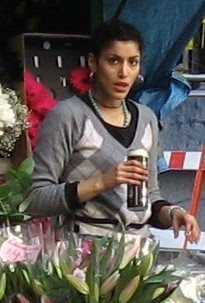 I have decided to commit myself to ensuring that this blog is updated regulary. I did consider starting a new blog, but then thought it might just confuse things still further for me. I've been posting various things on various parts of the internet - film reviews - cycling related stuff - etc, and therefore have neglected this blog.

Life isn’t going too well for me at the moment, unfortunately. Every element of my life seems to be going down the pan. Despite this I’ve decided to rejuvenate my Blog. What originally was intended to be personal with a bit of politics and a bit about my cycle adventures through London, is now to take a new direction. There will now be more about film, music, and Forteana, and quite a bit less personal stuff.

Walked around Vauxhall, Pimlico, South Bank yesterday after S. threw me out of the flat. S got angry about the constant fruitless pointelssness and mundanity of our lives. I became frustrated at this and started hitting myself on the head and screaming. Then I felt embarrassed and apologised, but I still had to leave.

I bought S an electric toothbrush as a peace offering, however, I now have to return this to the shop as she has rejected it outright.
1 comment:

Dark Underbelly of The Good Life

This programme feeds that fashion. The point is constantly made - 'do you know how to make that?' asks one character holding up a candle. And everyone in this programme is insufferably middle class. Most survivors seem to have a stately home and drive around in a Rolls Royce.

The middle class preoccupation comes through yet again when we find that a northern (northern = working class?) union leader has set himself up as Lord of the Manor, local police chief and high court judge combined, and sentences a luckless man to be immediately executed by firing squad. Our middle class heroine then runs off shouting 'this is what happens when people like you are in charge' (I paraphrase). The point is made: while all the landed gentry lay dying in their beds, the uppity working class start introducing their Stalinist ideals.

The sets are stagey, the acting stilted, the pace slow, but what do you expect from a mid 70s BBC production? I've given it 4 stars because it is what it is, and that is an ahead of its time end-of-the-world-as-we-know-it drama albeit, produced by English middle class media lovies.

It is well made - a lot of though has gone in to considering what the actual issues would be - and introducing these ideas to a relatively unsophisticated audience. To those of us brought up on Zombie films, and 'I am Legend' it might all seem a bit obvious, but stick with it. There are genuinely moving moments, some shocks, in all, some very good drama. And it serves as a social documentary of a time and a place.
No comments: