Put Your Vest On, Man!

I thought I'd seen this film before, settling down and watching this DVD revealed that I’d only ever watched a small part of it (including a bit with rotten corpses in it that I’d accidentally seen as a young child when I should have been in bed) even though it’s on telly about three times a year and I’m in my forties, meaning I could have seen it about 70-odd times for free during my adult life.
Instead I paid to rent it out on DVD. Which is good because it allowed me to rewind and pause the good bits. The bits with the dead people in it.
I read “I Am Legend” about three years ago, before the Will Smith remake last year, and while “Omega Man” takes liberties with the original plot, you can see why those changes were made, and they work. And it’s a good film.
Charlton Heston is probably a mis-casting – but not remotely on the same scale as Will Smith’s mis-casting in the remake. Heston manages to get a little pro-gun propaganda into the film (or am I being too sensitive?) And the vampires are gone, instead you’ve got light sensitive homicidal religious maniacs. That’s slightly disappointing, and takes the film out of the realm of out and out horror fantasy and into post-apocalyptic thriller.
Events from the book occur in a slightly different order, and the ending is softened to prevent depressed audiences leaving the cinema. But it's very enjoyable, quite tense in places, different from the book so if you’ve read that, there’s no spoilers in there for you.
There’s a couple of interesting extras on the DVD too.
No comments:

Americans must surely believe that everyone in Britain is rich and lives in a mansion, drives a sports car and does something terribly posh for a living - like being Queen, or a barrister.

I only watched this because it was lying about and I had nothing else to watch. I think that I'm safe in saying that all the comedy in this is tired and recycled. It's so terribly funny to see someone who has accidently taken a psychedelic drug just before they meet their girlfriends father at a funeral; or to see a corpse thrown out of its coffin during a eulogy; or even a dead dwarf being smuggled out of a crowded house; or an old man who has sh*t himself because everyone forgot he was sitting on the toilet.

Hilarious? Or feeble, rotten and mediocre?

You decide. But my advice is don't bother.
No comments:

Starring: Matt Damon, Heath Ledger, Lena Headey
Director: Terry Gilliam
Certificate:
I consider Gilliam to be a very important director. Brazil may rate as my favourite film of all time, and the only film to do justice to Orwell's 1984. He's made some other great films too. But this isn't one of them. This is a competent, slightly dull with a few good bits type film.
It's heavy on CGI - this despite Gilliam's insistance that he's reluctant to use CGI, it overpowers large parts of this film, and not all of it is very good.
It also doesn't really have much of a plot, which is a shame. And the last third of the film is more or less given to playing out what is a tedious and predictable story, not helped by too much CGI as the wicked princess goes all to pieces and her tower comes tumbling down.
There's good in here though - Jonathan Pryce and Heath Ledger both put in brilliant performances. Some of the effects work and there is much detail within the sets, and a lot of thought put in to how things might work. This attention to detail Gilliam has is something I admire and wish was a more univeral trait amongst movie-makers.
All in all - I wouldn't recommend it. I'd say don't bother - unless you really want to of course.
No comments:

In Space No-one Can Hear You Snore

The alien character was mildly annoying, and I kept hoping his role in the film would end quickly. It didn't.

The making of feature was more interesting and more illuminating in my opinion.

Maybe on a big screen with quad sound and after taking the right drugs, this would work. I'm glad it was made, and I realise some will love it. Not for me though
No comments: 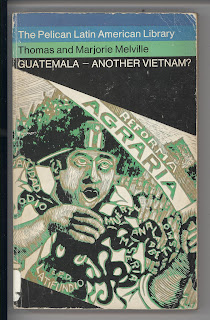 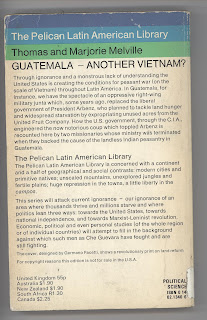 Quite a dated book now. I collect books like this for the simple reason that they are history. They contain accounts of events that are being written out of the official history. The western democracies wish to portray themselves as progressive, open, non-aggressive. Unfortunately the record of events in the third world shows that western democracies are anything but. If, heaven forbid, a genuine case of actual democracy breaks out anywhere within our sphere of influence, then we simply have to crush it. This books documents the events in Guatemala that followed such an outbreak of democracy - democracy that led to America's will being defied. America was defied, so America stepped in and punished those involved.

I go to this every year. It was a bit disapointing this year. There was only one stage and the weather was poor. I went with S. and we didn't stay long, although I regret missing the bands. It was hard to relax with the rain coming every 20 minutes or so. 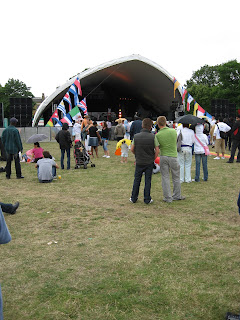 We stopped at this stall (below) to buy lunch: 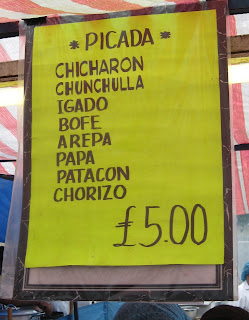 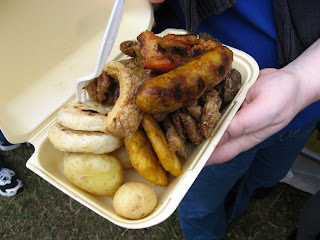 It looked like this - mainly offal - but the chorizo and plantain was very tasty, and none of it was too bad. It was very filling anyway - not bad for £5. Afterwards we realised that we'd have been better off buying one and sharing!