Freaks on DVD (1932)
Starring: Wallace Ford, Olga Baclanova, Leila Hyams
Director: Tod Browning
Certificate:
I can't add much to the reviews already posted. I've waited nearly 10 years to see this film, since I first learned of its existence, and I wasn't disappointed.

The film itself is a bit sad - it's been incredibly insensitively edited so there's the odd bit that just makes little or no sense. Unfortunately the removed portions have been lost so there's no chance of restoration, you'll just have to imagine how it Tod Browning intended it to look.

This package is magnificent. The documentary and other extras are extremely well researched, even if the delivery is a little like a film-school lecture.
No comments:

Last Friday I saw the new (I say new but it was made in 2007!) film by Bruce Campbell - My Name Is Bruce. It was a lot of fun. Very funny for fans of Bruce's work. I wrote review on Lovefilm so I won't go on here.

Watched "Ghost World" on DVD last night. Based on the comic and graphic novel. I loved it. I laughed plenty and had massive empathy with the character Enid. Considering Enid is based on the nearly 40 creator of the comic (her name Enid Coleslaw is an anagram of his) that's probably not surprising. By the end of the film, as her friend Rebecca settles down in a "normal" appartment with a "normal" job Enid realises she is destined to always be different and takes off out of town. Steve Buscemi is in it too, and I like him a lot.

Speaking of different I was very taken with Mozza's interview on R2 last week. Apart from the disapointment of not being selected to get free tickets to see him at the BBC Theatre, I listened enthralled as Mozza discussed the pointlessness of band re-unions and the wretchedness of music awards. Funnily enough the comments on awards were echoed a few days later by Terry Gilliam being interviewed on 5 Live's Mark Kermode podcast. It's no coincidence that I consider both Morrissey and Gilliam to be among the very greatest in their respective fields.

Thursday night found me at a South East London Folklore Group meeting which consisted of a guided walk around the London Pool - Tower Bridge, London Bridge, and all points in between. Quite taken with the idea that there might be a polar bear ghost swimming baout in the Thames, especially on Thursday when it snowed hard enough for snowball fights when I got off the train at Bexleyheath.

I've also got some new music - I splashed out to the tune of £30 in a local record store. Bought Tom Waits - Blood Money
Ultravox - Vienna and the debut Ultravox!
Sex Pistols - Never Mind The Bollocks
Kernickie - At The Club
Iggy & The Stooges - Funhouse
Gwen Steffani - Sweet Escape
No comments:

blocked from my own blog

Well, the obstacles between me and getting some decent blogging done keep coming at me. The latest is the fact that my employer has seen fit to block access to blogger sites.

This prevents me from editing content during my lunch hour or after work, and I won;t be able to upload photographs either.

Well, I've moved offices again. Now I'm based at Holborn, and suspect I won't be here for very long. Looks like I almost certainly have a job after the big reorganisation that's about to start though will have to attend an interview to get it.

I'm on anti-biotics for my sinus problems which is stopping me from sleeping properly as I can't breathe through my nose. One week of taking them and there isn;t much difference - so will have to go back tot he doctor on thursday and probably bay another extortionate £7 something for the privelege.

The bike has been out of service for a week. As I fix one thing another thing goes wrong. Now my back brake is broken - the spring seems to be mal-functioning - the one that keeps the brake off the wheel. So I've had to detach the whole thing until I can get a replacement. My front gear isns't working - so my 18 speed now only has 6 speeds. And last night I fixed the third in a series (or three, hopefully) of punctures in my back tyre.

I cycled in today - and it didn;t precipitate either - so there is every chance I will cycle in tomorrow too - if my right knee holds out that is.

Attended a Bexley Cyclists meeting last Tuesday - there were four of us and I took on the task of organising some nice cycle rides into the countryside.

Tonight I attend a Friends of the Earth meeting.

Win £3000 to spend on whatever you want at Uni! Click here to WIN!
No comments:

In common with a lot of people in the South of England, I couldn't get into work yesterday. Unlike a lot of other people - I tried!! I left the house before 8.00 and walked to Bexleyheath station. Passed some old duffer at the bus-stop - thought I'd do a good turn and let him know all the buses have been cancelled today. He didn;t believe me! This despite the fact that clearly no buses were to be seen - which never normally happens. 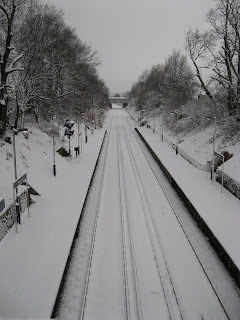 I was turned away from the station (above) - immediately texted work to take leave (my boss wouldn't accept this saying that as far as he's concerned I was working at home). Well I'm the only one from the team to have made it in today - so I deserve something! 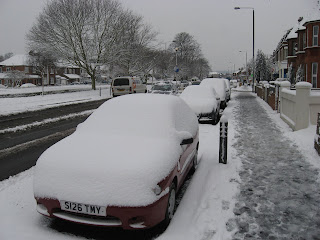 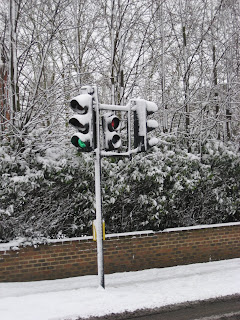 Later - had a bit of a walk in Danson Park 5 minutes from home. It was full of kids - not photographed in case of accusations of peadophilia - making big snow balls and snow persons of indeterminate gender. 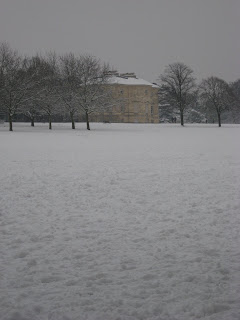 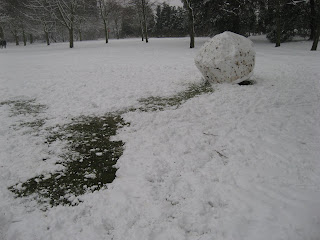 My Name Is Bruce on DVD (2007)
Starring: Adam Boyd, Bruce Campbell, Mike Estes
Director: Bruce Campbell
Certificate:
I'm a big fan of the Evil Dead trilogy. The second one was best of course, but number three has a place in my heart. It features an extremely funny Bruce Campbell doing Three stooges slapstick.

This is the Bruce Campbell you get here - one that will not take himself the least bit seriously. In this film he paints himself as a washed up B-Movie loser that he clearly isn't. Irritated by his fans and washed up in a career that finally leaves him starring in a terrible franchise called Cave Alien.

Meanwhile - the world's biggest Campbell fan - a kid in a little hick town called Goldlick - accidentally releases a violent Chinese god which proceeds to terorrise the town to avenge the death of Chinese workers in a mine tragedy over a hundred years before.

For Evil Dead fans there are plenty of in-jokes, some good, some lame; however, Campbell's good humoured and self deprecating performance carries the whole thing along beautifully. You get a generous serving of Ted Raimi too - Sam's less famous brother who mainly played deadites in Evil Dead, playing an assortment of odd characters in this. I laughed out loud at least half a dozen times. Which is good for me.

Forget JCVD - see this instead.