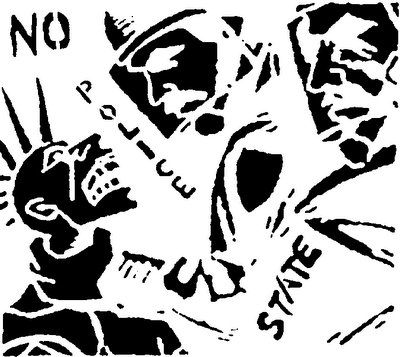 This is it then – ID cards are on their way:

The Queen made her speech, and it included:

"My government will legislate to introduce an identity cards scheme and will publish proposals to support the continuing fight against terrorism in the United Kingdom and elsewhere.
Legislation will be introduced to establish the Serious Organised Crime Agency, and the powers the police and others have to fight crime will be strengthened. In particular, the bill will introduce new measures to deal with harassment by animal rights extremists."

The Guardian adds more detail: We're gonna be getting "a central government database with personal details and biometric data on every person in Britain."
"Blunkett rejected claims that the mandatory government register of identity amounted to the establishment of an Orwellian surveillance system."
"Blunkett said he hoped to have the database up and running by 2008, after which time anyone applying for or renewing a passport or driving licence would automatically be added to the register and supplied with an identity card."
"He hoped it would be compulsory by 2012."

With it comes this:
Grauniad: “A draft anti-terrorism bill could propose juryless anti-terrorism courts and laws against individuals suspected of "acts preparatory to terrorism", and another draft will create a crime of corporate manslaughter.”

These bit worry me to:
"My government will introduce legislation to tackle the problem of drug abuse and the crime thatflows from it, and will tackle the disorder and violence that can arise from the abuse of alcohol."
We're gonna get "a drugs bill will allow police to drugs test people arrested for comparatively minor crimes and prosecute them for possession if any are found with illegal substances intheir blood stream. Councils would also be able to evict tenants who allowed properties to be used for casual drug use." Eek!!
"My government has always recognised the importance of clean and safe neighbourhoods. There will be further legislation to tackle antisocial behaviour."
New Labour are the most authoritarian government we've ever had - I've taken to calling them IngSoc - the government in Orwell's 1984. I hope this frightens people into voting other than Labour.
No comments:

I took S with me to see Camper Van Beethoven at the Sheps Bush Empire.

The latest album is about the US's attempts to carve out a new Roman empire in the Middle East. I bought the CD before we left: country, ska and rock, all mixed together, fantastic.

Nick Cave and The Badseeds

Saw Nick Cave and the Bad Seeds at the Brixton Academy.

It’s remembrance time again. Nearly. The debate was on John Gaunt and the usual white van brigade rang up to complain – “What is going on in this once great country of ours” blah blah. It’s over white poppies or refusals to wear a red one because of what is going on in Fallujah. They say “you wouldn’t have been able to say that 60 years ago in Germany” or some such shite. It’s paradoxical of course, because the speaker wouldn’t allow you to say that now if they had their way – why else are they making this point? They say go and live in another country if you don’t like it; and apart from the fact that – actually, this is my country – and the point that, I am considering it anyway – why don’t they go and live in another country if they don’t like free speech? I don’t like the moral high ground taken by these morons – my family fought as hard in WW2 as any other family and we cherish free speech and we abhor violence, especially violence conducted by this “coalition” against civilians in an illegal invasion.


I’ve come to the conclusion that I will give money to the fund if I see someone collecting but will not wear a red poppy
No comments:

The attack on Fallujah is on. My government is complicit in bombing civilians who are trying to resist an illegal invasion. Well done Tony Blair. However evil I ever thought you were, you’ve surpassed all my expectations.

We managed to obliterate a hospital yesterday. Well done everyone!

What is happening in fallujah as described by people actually in situ does not remotely resemble the crap that appears in Western newspapers and on TV.

Robin Cook has been making some good points. He said the turning point in Fallujah was soon after the invasion was completed. The people of Fallujah welcomed the Coalition initially with little or no resistance from the people there. But when parents protested at the US occupation of their children’s school, US troops shot several parents dead. This upset the people of Fallujah. Can’t think why. Trouble is Robin Cook’s comments have dropped off the BBC bulletins by 11:00 and are not being discussed at all on John Gaunt.

Drink driving is on the increase over here – up from 10 years ago.

Death – a member of New Model Army died on Sunday (?).

One funeral, one election and a birthday

Well, that's it. The US election is over. Bush won. Easily. I'd like to know what role the crooked Diebold machines played in achieving this. There's been no word in the press about this, but I can wait.

Watched "The Power of Nightmares" last night. Al Qaida is a fake organisation invented by the US government. How come I'm not surprised?

We had the funeral on Wednesday - went smoothly. I got to wear my new black suit.