After the rain - it got sunny again! The ground quickly got hard, with occasional patches of mud. 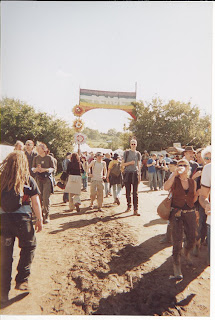 For the last afternoon I thought I'd have a main stage day. I saw James Brown, Supergrass, and Mozza! 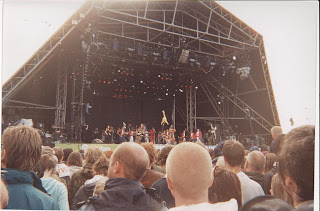 Some comments about Mozza's performance here

It rained. My finely tuned timetable was obliterated. See the cider bus in this picture - which remained the focus of activity despite the rain.

I had a good day - catching stuff that I knew I could comfortably get to without having wade about in tons of mud. even so, I still managed to get covered in pissy mud that I fell in near the men's urinals!

Sat and spoke to a woman for a short time and we compared how exhausted and achey we were, shortly before I launched myself into a packed tent to see Hazel O'Connor performing. 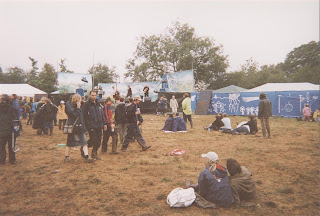 It was during a theatre workshop (yeah, really!) where I saw Michael Evis, who actually smiled at me - probably recognising the signs of a man under mushroom influence.

S. told me I could go to Glastonbury by myself. So I went!
I set off on my bike. Here's me - S behind the camera - setting off from outside my wife's place of work in Camberwell. I didn't cycle all the way, just the bit to Paddington Station, then the bit from the train to the site - which was 6 or 7 miles IIRC.


Interesting trip down on the train and i was able to completely bypass the queue for the bus by cycling the last bit. However, turned out to be a lot hotter and a lot hillier than I had anticipated. Not then being used to this cycling with a house on-board malarky, I struggled. I dehydrated. I got a head-ache. I felt queasy. All this before I even reached Glasto.

However, once there it was as smooth as could be. I found one of the very few remaining spots for a tent, not ideal, but as it turned out, perfectly adequate. I stashed the bike in a left property tent along with my bags, and walked out into the festival, intending to ENJOY! With all capitals, like that. ENJOY!! 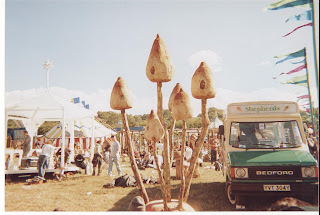 so these pics were taken on a disposable camera, the last time I ever used one, mostly on the Thursday afternoon. in those days the festival didn't start until Friday, but there were a few things going on on Thursday, including a man wrapping himself in clingfilm as an entertainment experience. No pictures. sorry. 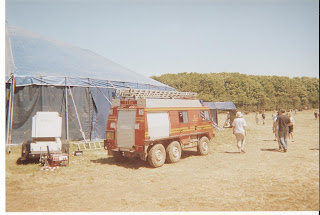 Friday was my first whole day at Glastonbury. The picture below is of the crowd between bands at the Other Stage. I endured Snow Patrol in order to be near the front for Franz Ferdinand and The Zutons. FF were magnificent. 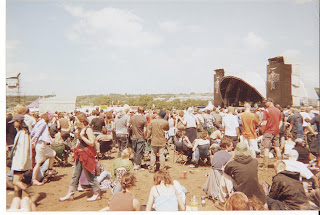 The green tent is mine. Just about the only spot available when I arrived on Thursday, probably becasue of it's close proximity to the bins, the toilets, the welfare tent, the lost property tent, and the BBC News portacabin. Not that any of this worried me, I more or less passed out before during and after arriving at my tent, and as soon as I woke up, I got up with everything I needed right there. And I saw my tent on News24!


I had a wander on Thursday - where I took a lot of these pictures. Friday was tightly timetabled to see maximum bands, allowing time for magic mushrooms and a French sausage casserole - or two.
No comments: