Today it started out clear, although a bit chilly. I’m pretty much re-acclimatised to the cycling now, after about a month with the bike out of order, and finally my bum and legs have stopped hurting too badly. There's the problem of only having one brake, and the fact that my chain has begun to slip. I would put it in for a service but I've just got it back, so I'll put up with it for a couple of weeks. I've been thinking about getting a spare bike, but that'll cost money and I want other stuff first - digital camera - laptop.

I cycled from S's flat in Camberwell this morning. Going through Kennington there were many motorbikes clogging up the spaces normally inhabited by cyclists. The number of motorbikes and scooters ahve gone up a lot in the last couple of years, thanks to congestion charges and bombs on the Underground. The advanced Stop Line (ASL) shown below was exclusively filled with motorbikes. I didn;t get a look in, and had to hang around at the back where the cars were. And that is kind of what the point of ASLs were supposed to be. In fact I'd scrap ASL's now, they don't serve their purpose, and the misuse by motorcyclists have actually made things worse for us.
motorbikes in the ASL.

And they're off; Not a cyclist in sight:

Then approaching Tower Bridge - this is always happens. This van had stopped here, blocking my progress. If the traffic is slow, then this becomes the major hazard, and the prime cause of my slow progress.

What Happens When Cycle Lanes Die. Cycle Lanes are rarely maintained, and often not replaced after road works. It all seems like a complete waste of money to me.

When I reach Victoria Park I'm nearly at work, and if I'm making good time, I can slow down and take in the pleasant surroundings. Often though, it is the only place I can actually get up a good turn of speed. No cars, you see. Just as I reached the park this morning, masses of people started coming out. You can just see them below, coming out of the right hand side gate.

Hackney Marshes: not much to be seen

Truck comes out of the mist at Leyton:

Cor Luvvaduck - its a right pea-souper and no mistake.

The fog lifted later in the day, although it became quite chilly by the time I cycled home.

Danny Baker was back on the radio today. Hoorah!! So I sat at my desk listening. And chuckling to myself. I especially liked his story of how he met his son's girlfriend's dad for the first time stood in his underpants and vest. You can listen to him via the BBC website if you're interested.

On the way home, by the New Spitalfields market, I go over this section of the cycle path, left, which is becoming rapidly overgrown. Two cyclists can longer pass each other at this point. The there's a bit which is next to a bus stop. Anyone waiting for a bus will stand on the cycle lane and refuse to move when a cyclist comes along. Some just leave their shopping on the cycle lane. I decided to go round these two. Below.

curry night – S’s plan was to make a couple of currys. One was chick peas cooked in spices. Another was my dhal. I didn’t like the dhal and ended up making my usual recipe. We also did a pilau rice and some popadoms.
Watched capturing the Friedmans – very peculiar film.
1 comment:

A Message From Hackney

Hackney is known for being the home of radical artists and political activists. So its no surprise to find this intelligent and coherent message scrawled on the side of a Hackney pub.


Organisers of public processions are required by law to notify police at least 6 days before the event occurs of the date, time, proposed route and the name and address of an organiser. Failure to do so makes the event unlawful

Demonstrations within a designated area around Parliament must also be notified, and anyone taking part in an unauthorised demonstration commits an offence.

Police can impose conditions on processions, demonstrations and other assemblies, and participants render themselves liable to arrest if they fail to comply with those conditions. 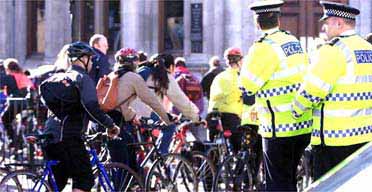 These cycle protests are not lawful because no organiser has provided police the with the necessary notification. Your participation in this event could render you liable to prosecution.
Police policy in facilitating these events is currently under review.

If you intend to organise a future similar event please refer to the Metropolitan Police website, www.met.police.uk for details. It is preferable for all parties if a lawful event can be safely facilitated, rather than the Police having to enforce legislation.


“in the wake of police attempt to criminalise the 12 year old critical mass cycle rides, here is a pdf flier (two on an A4 format) to print and distribute widely to try and creat a thousand cyclist critical mass for the 28th October”

I'm reading "Black Vinyl White Powder" by Simon Napier Bell – Julie Burchill called it "breath-takingly brilliant". I’m not sure about that though. It’s interesting, but there’s little insight into music except the drugs influence on the music, which I think he is exaggerating. And then there's loads of really obvious factual mistakes which really should have been picked up before publication.
www.uim.info/snb/snb.htm

The new Kate Bush record got another play on 6Music this morning. It works for me - her voice, something about a "King of the Mountain", proper drumming, and wind effects in the background, you can imagine kate hair and dress billowing about in the wind standing atop some celtic mountain range or other. Can't wait for the album.

I saw a bastard taxi driver driving a black cab this morning. He drove straight through a red light, with people crossing, and then denied that he'd done it.
His number is 16793 – if you see him stop him and give the c**t one from me.
1 comment:

But it was all worth it; I was back in the saddle and back on the road, swearing at motorists.

Now I've got to lose all that weight I've put on since my bike's been out of order.

I've got a very bad cold. I've been keeping S awake at night with worse than usual snoring, and having quite restless nights myself.

I've also managed to update my entry for Dymchurch, strange village that I visited in the summer - pictures and a bit of writing.

Here's a David Bowie website - its all Ziggy Stardust related stuff.
No comments:

Me and S went on a little exploratory trip round South London trying to find the hidden bits of the River Quaggy. This is a bridge over the river, in Lewisham:

The river - looking towards the east:

this is a map of the Quaggy we found in Kidbrook: