I Saw A Stag Beetle Yesterday 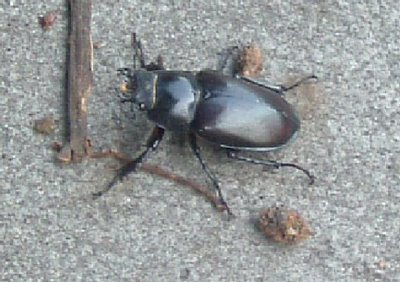 It was on the pavement by woolwich Common.

After I took the photograph I moved it into the foliage where it wouldn;t end up getting squashed or picked off by a bird.
No comments:

Stuck In a Traffic Jam 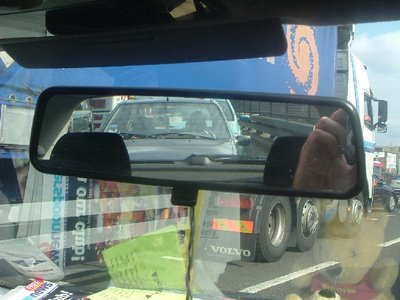 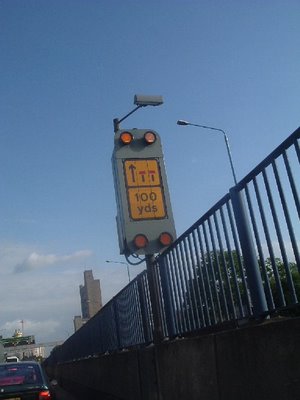 You can see two permanent residents in our car here - the cat S bought at Chinese New Year's and the Winnie the Pooh that I got free with soem stuff once - about 16 years ago. 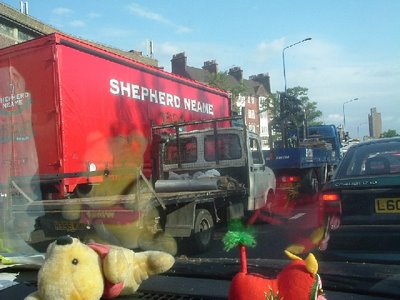 after the Shepherd Neame lorry passed me all I could think of was the nice chilled beer I could have once I got home. I didn;t realise at this point I had another two hours before I managed this. 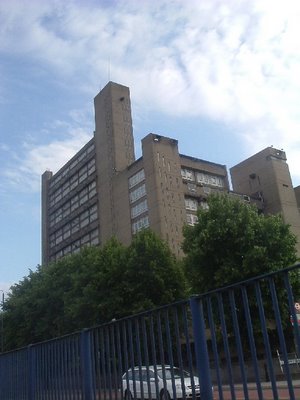 Very good news and I shall be on tonights CM.

I'm gonna stick some names on here now, in case any of these people decide to google for their own name, and they'll get my blog up. This page in fact. Bill or Will sheward, Andy or Andrew Willis, Ed or Edward Millar, Dave Murrill. Dave - give me a ring!
Hi guys- I'm sure you can work out who I am - keep in touch!
No comments:

I've emailed this in - just to see if it works.
Heart FM - anyone listen this heap of shit disguised a sa radio station?
How many times does anyone want to listen to "Dock of the Fucking Bay" and "Heard It Through The Sodding Grapevine"?

I had the car last night - I'm laying off the cycling a little until the Dunwich Dynamo next week. I came off the motorway coming out of the Blackwall Tunnel last night, and tootled round the Greenwich peninsula for a little bit. There's not much to see, lots of building sites, an eco friendly Sainsbury's, and the Dome looming over it all. It's all set out in wide tree lined avenues, like its some sun-soaked coastal community on the Med.

Then I got bored and headed home, via Chislehurst High Street. Half price duck in the chiller, and I couldn't resist. The girl on the check out engaged me in conversation - "what's duck taste like?", "Do you feel funny eating duck when you can see them swimming around?", "Is it for a special occasion?".

I spent the evening putting tracks on my MP3 player - an album by The Coral, Polyphonic Spree's first one, an early Pulp cd, and the Scissor Sisters.

Just gearing up to putting some Beatles on there. I was spurred on by certain fuckwitted and immature anti-beatles posturing on Urban 75 yesterday to listen to the White Album again. It sounded better than I expected, with a few stand-out tracks - Dear Prudence, Wild Honey Pie, Me and My Monkey.

I've got the cats living with me now - and on Wednesdays when my daughter is visiting her Grandmother just a few doors along from my house, I take the female cat along so they can have quality time together. Then, at about 10.00, the cat is brought home again. She's usually a bit overexcited by this time, and runs around the house making meeping noises.

When I water the plants on the balcony, the male cat mews pathetically at me: 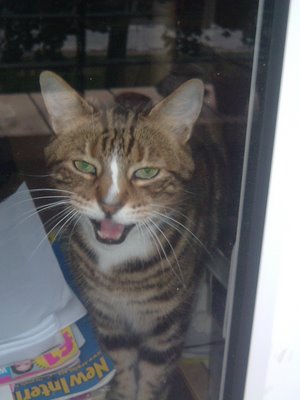 When I try to work on my laptop - he does this: 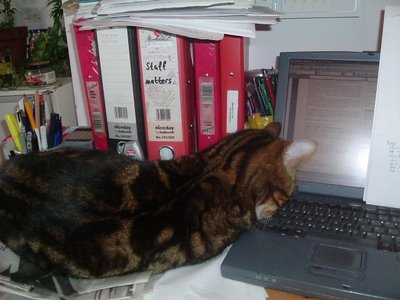 So I take the piss out of him sometimes - here I am honouring him by photographing him with the certificate he won at a cat show once: 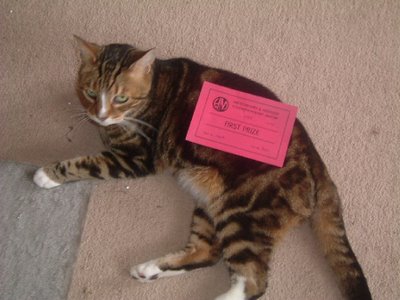 There was John Cale special on 6Music this morning. I've got a little bit by him, but I realise I need to get more.

I'm no longer the only cyclist in the depot. I saw some other bugger had his bike locked up in the yard the other day.

I finally gave in to the nagging and saw a doctor the other day. I'm completely healthy apparently. So if I feel shit all the time, it's my own bloody fault. 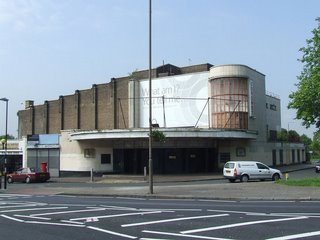 I stopped to take a photo of the long-abandoned and derelict Eltham Coronet. A friend from my Thames Poly days used to go see films here back in the '80s and S. was in here quite a lot too, years before we actually met for the first time, watching late night horror film screenings.

It's a damned shame that no-one can find a use for it now though. 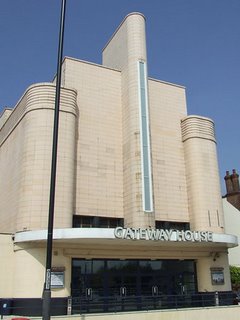 Even more of a pity that it can't be reopened as a cinema - it'd be ideal for people in my area who can't be arsed traipsing all the way into the West End to see a film, plus local cinemas always showed stuff that the big central cinemas just can't afford to show - old sci fi and horror classics.

Though looking at what happened to the Woolwich Coronet, I guess there are fates worse than death for old cinemas.

The Woolwich Coronet is now some dodgy American Evangalist church. I used to see bands, and cheap Wednesday matinee performances of the latest Hollwywood releases there.

And of course - the inevitable Woolwich Ferry pictures; I can't resist. 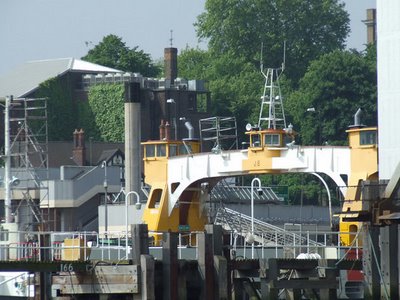 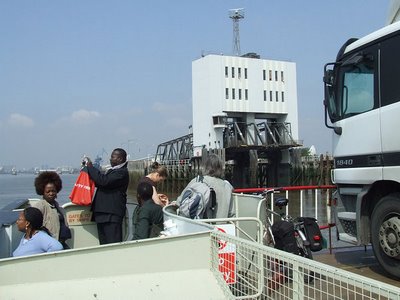 If in doubt - park in the cycle lane - even if it
means you have to mount the pavement. 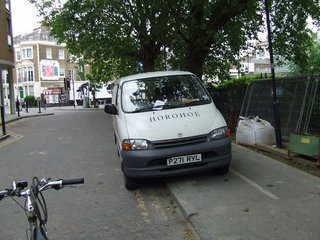 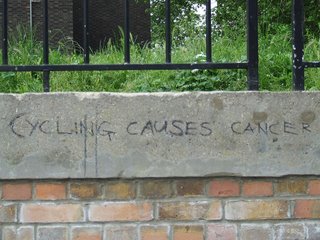 yes of course it does.
No comments: 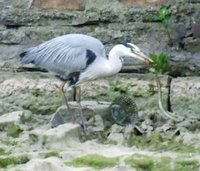 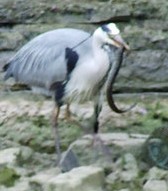 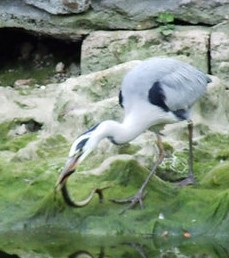 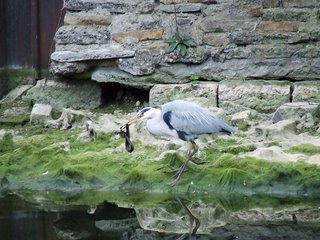 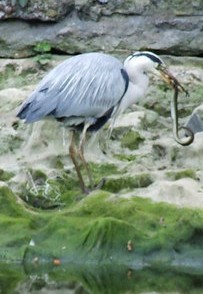 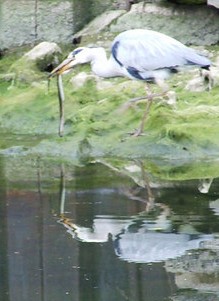 I was cycling through Eltham the other day and noticed that this pub - which has been derelict for years - has finally burnt down.

Which is handy for whoever owns it - as they will now find it so much much easier to gain planning permission to build luxury housing on this site.

On the left - detail - you can see smoke still rising from the inside of the building. 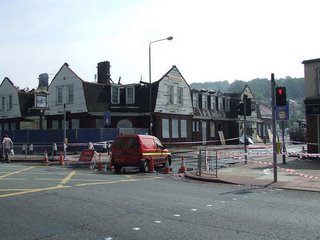