I discovered this festival by accident a few months ago. It seemed fairly cheap and yet with a stellar line up. In previous years bob Dylan and Neil Young have played, though I gather 2009 was a wet squib and in 2010, many were disappointed by Dylan's performance. I'd have liked to have seen Dylan though.

I haven't been to a proper festival since 2005, Glasto. Since then I've been too mired up in my own problems to be bothered. So this is all very good news if you're me.

One thing that sold me this fest was that it is just 30 minutes drive away from where i live. I could have cycled if I had to. I didn't have to.

I just went for one day though and camped over till Sunday. It cost £25 to camp but on the whole was worth it to keep the festival feeling going for just a little longer.

I'm still buzzing now, as I write this, at home. 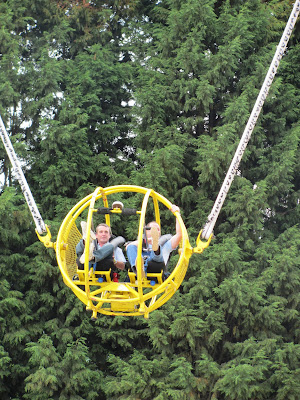 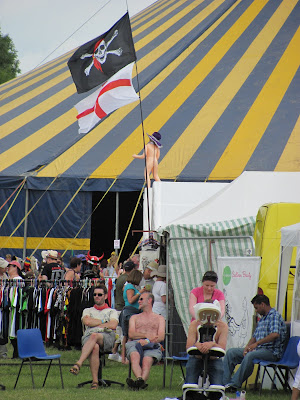 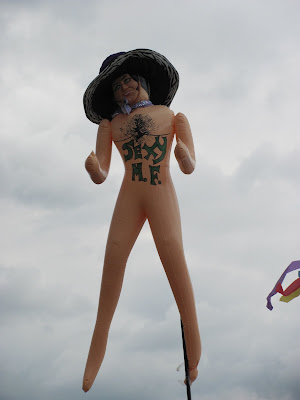 We got there in an hour due to bad traffic in Welling (Danson Festival) and were parked up, feet planted on festival dirt soon after noon.

Then tents up, and straight into the arena. We walked past food stalls, clothes stalls where ladies tried on vintage dresses while hubby sat bored, being asked intermittently to give his "honest" opinion, and wondering why his festival experience has gone quite so radically wrong.
The food stalls looked good, the eye-catching ones being the Mexican food, the hog roast and the Indian style burger van below: 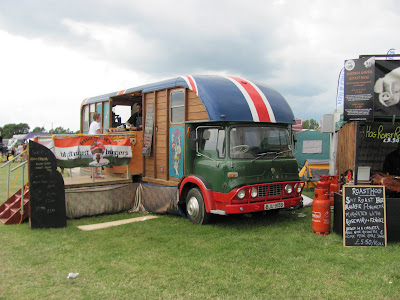 And then the music:

We started with Frankie & The Heartstrings. --> On Myspace.
They were even better than I expected from seeing their stuff on Youtube earlier this week. Young, and therefore very energetic. Good to see a young band not trying to be achingly cool, or under the delusion that they are black in any way. This band from Sunderland, working class, and a throwback to the 80s when bands behaved like gangs and the music was less well crafted but much more heartfelt. A fabulous perfomance by a fabulous band, and I hope to see them creeping up the bill in future festivals.
We followed them by watching the Bluetones, now on their farewell tour. I remember them bringing out their first single and getting played by Mark and Lard on Radio One. They were a band I neither hated nor loved. A band that were almost too bland to remember, though always perfectly pleasant when being played. The opposite of the Heartstrings in that they were perfectly crafted and yet deviod of passion. We watched two songs and then moved on.
After the Bluetones we wandered off to catch legendary band Magazine on the main stage. 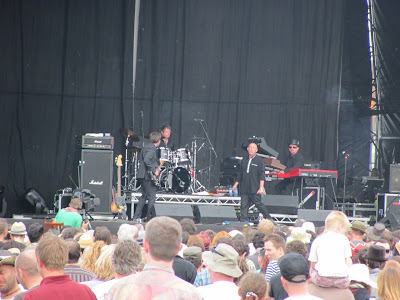 I knew a few of the songs and enjoyed the 30 minutes set, though 30 minutes was enough.
After Magazine my friend and i parted ways while i trotted off to see Graham Coxon, P stayed on to see Patti Smith's accoustic set.
Coxon was magnificent. He seems to have absorbed the history of rock & pop and regurgitated it in the form of several albums worth of brilliant pop songs. This guy was the heart and soul of Blur as far as I'm concerned and the bast part of it too. It was a rollicking set, and though I knew very few of the songs, it didn't feel like that.
A break in proceedings followed while we toileted and snacked, and got into position at the main stage for Lou Reed. 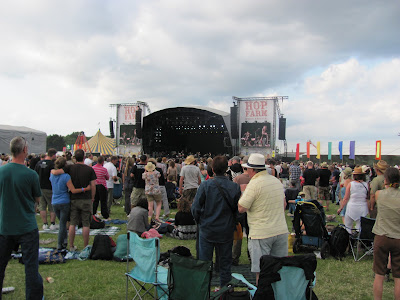 Some said he was shit. Mostly people said they were disappointed. Well I thought he was in good form. I was also mightily impressed with the tremendous bad language he used in a couple of the songs.
It's true that Lou was not in a crowd pleasing mood. He was sombre and downbeat. But then, isn't Lou always sombre and downbeat? In fact he did quite a few crowd-pleasers: Velvets classics "Sweet Jane", "Sunday Morning" "All Tomorrow's Parties", "Who Loves The Sun"; a cover of Lennon's "Working Class Hero" and a number of solo numbers including the fairly obscure "Waves of Fear". OK - some of the introductions dragged, and a few numbers sounded a bit droney. Lots of it was a mite bit too delicate for a festival format. I feel he'd have been better rocking out a bit more, like he did on the last two numbers. But really, what did people expect? Ling a longa lou? Lou sings popular songs including his greatest hit? Lou's always been challenging, and that's what he was today. Challenging but worth the effort i'd say! 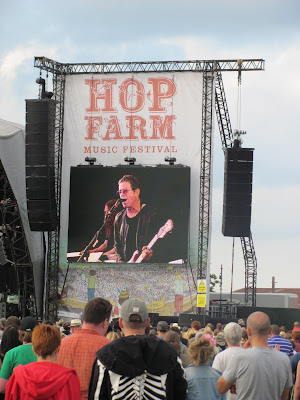 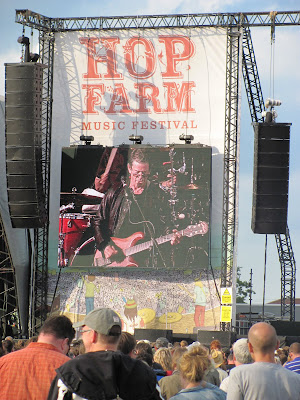 then Iggy. Crowd pleasing Iggy, who can do no wrong. He really was our dog and you could almost see his tail wagging non-stop like an eager to please terrier. ~He looked so happy on stage! and I'm so happy that I've finally got to see him. 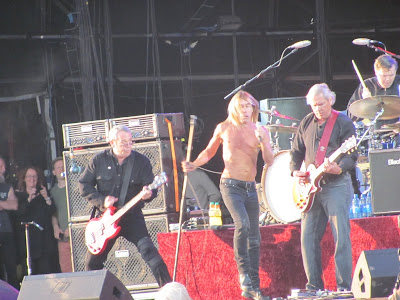 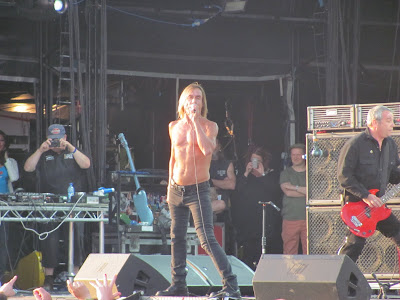 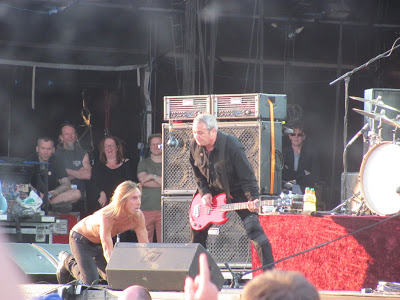 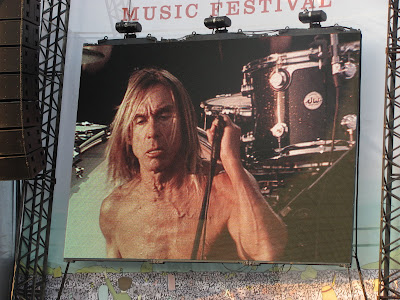 Finally, Morrissey. Headliner in a gig that included Patti Smith, Lou Reed, and Iggy pop. Of course Morrissey was aware of this, and remarked "How can anyone follow Iggy Pop?"
Before coming on stage we were treated to a video compilation of Mozza's faves including Gene Vincet, Diana Dors, Lou Reed, New york Dolls, Sparks, and others. The set itself was a throwback to the era of Smith's covers being mainly stills from classic old films. And Morrissey did more smiths songs than I remember him doing any time in the last 20 years.
Before Moz appeared, a woman approached me and asked for my help. There was a bloke sat in her folding chair next her partner and bothering them, refusing to get out of the chair despite being asked politely and kept asking them if they were lesbians.
I genuinely did not give it a second thought. I consider lesbians to be a part of the continuum of "god's chosen people", though there be no god, if there was a god, a good and groovey god, they would be right in there!
So that two lovely lesbian ladies were being bothered in front of my very eyes was a call to action. I jumped in and confronted the brute, for a brute he was. Half my age and abviously stoned, and again, right in front of me, asked the lady to his left, "are you lesbians?". Clearly they were, and clearly it was none of his business. I tried to reason with the guy. P had joined me and was standing shoulder to shoulder with me. I hoped to intimidate him out of the chair for me and P are quite big looking blokes, and I know I can intimidate if I want to, for a good cause mind you, never for evil.
The guy was heavy, very heavy. Seemed to be using protester techniques on us, the very ones I used to once to prevent the police from carrying me out of protests. You think heavy and do an impression of a sack of cement.
So - and this took everyone by surprise, inclduign me. I held the chair down and pivoted it backwards so the guy fell out of the chair onto his back, and then pulled the chair out from under him. Voila, one twat now removed form chair. so he decided to rugby tackle me and after a couple of goes got me over. Then some other blokes joined in the attempt to intimidate him. this time it worked. The kid tried to be friendly, I don;t think he ever meant malice, but behaving like a twat was not a way to win friends, especially amongst the lesbian community.
Then a security guard joined us and finally, finally, after a bit more threatening - this time that he would be thrown out of the festival - he walked away.
Shortly after that Moz walked out onto the stage. 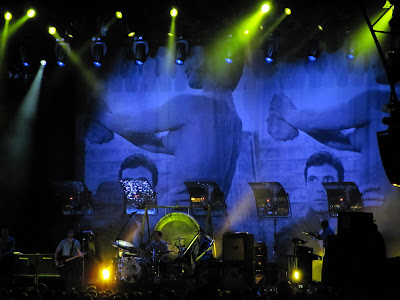 We got treated to "Murder", "There Is a Light", "Miserable now", "Panic", amongst others, and such Morrissey classics as old b side "ouija board", "you're the one for me fatty", "everyday is like sunday" alongside more recent fare such as "paris", "irish heart" and "first of the gang".
For the moment Morrissey is still the Godfather of Indie pop and long may he reign. 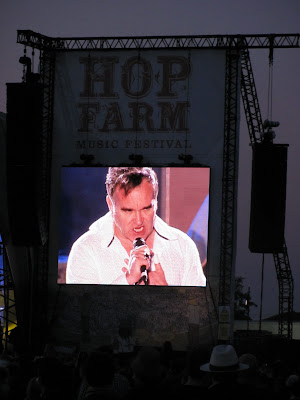 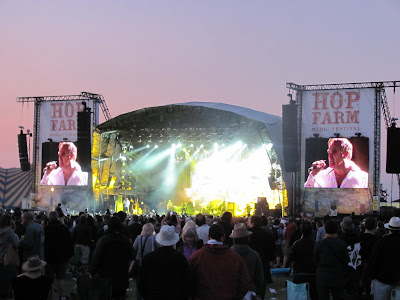 I was very disapointed that the comedy tent at midnight was so packed out I couldn't get near it. I wanted to see Sean Hughes and Stewart Lee, but so, apparently, did everyone else at the festival.

instead we went to the Mexican food stall which had ben singing to me like a crazy-loud motherfucking siren ever since we arrived there - chilli, burritos, tacos, tortillas, and all that excellent stuff from my favourite north american country.

What happened next wasn't planned. once back at the tent i suddenly became too damned tired to move. P went back to the bar and left me for (nearly) dead. I rasped "go on without me, I'm not going to make it" through my gritted teeth as I lay pathetically on the damp grass. My two cans of lager went undrunk and instead i lay in my tiny tent listening to drunken conversations and marital rows as couples sweetly whispered such words as "fuck you, I was waiting for you there." There was also a couple who got busted for having drugs, though they did get let off as long as they took it back to their tent.

I slept fitfully and woke up with a hangover and a full bladder, inside the world's smallest tent.

I love festivals, can't wait for next year!!

A Sideways Look at Lou Reed