Christopher Josiffe: Gef the Talking Mongoose
The link takes you to the Fortean times article which appeared back in January. a lovely and entertaining article, nice bit of research by Josiffe, who I met once at a South East London Folklore Society meeting.
I missed all but the Q&A session for this.

Dave Clarke and Andy Roberts: Cursed Stones
Dave Clarke, again, sharing the stage with "long-time sidekick" Andy Roberts for a talk on cursed stones. This examined "cases where people have linked hauntings and other supernatural experiences with cult stone artefacts such as Celtic stone heads and other stone objects, such as the Hexham Heads and the Tigh nam Bodach shrine in Scotland."
http://www.philipcoppens.com/glenlyon.html

Andy Roberts started off by saying that though the pair wrote the UFO section in the Fortean Times, this wasn't their main field of interest, that they only wrote the UFO stuff to piss off the readers (big laugh). In fact their main field of interest seems to be, er, fields. And things you might find in fields, stone circles, ley lines, that sort of thing, and indeed, the subject of this talk, "cursed" stones.

The talk started in Scotland. The claim was made that spiritual beliefs and practices have survived from pre-Christian times in various parts of the UK. Examples were forthcoming.

The talk also took in an area of Derbyshire where sacred stones are secretly revered. 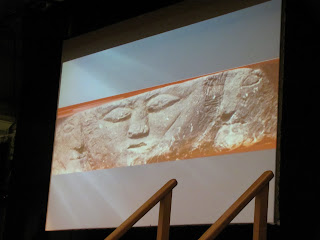 This particular "cursed" stone head (below) after apparently causing havoc, was eventually taken to Lockerbie by its fearless and sceptical new owner in December 1988. Subsequent events led to said sceptical owner suddenly not being sceptical any more. 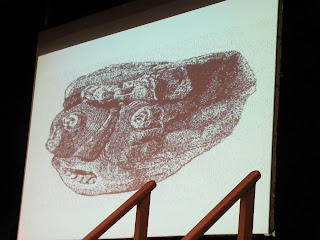 The story of the Hexham Heads was recounted, and I do remember reading the article in the FT quite a long time ago now. These stone heads were dug up and strange things a happened. We learn also that a man, (truck driver?) eventually popped up on Nationwide to claim he had made the Hexham Heads and indeed made some more that were nearly identical. Regardless of their authenticity, they are currently missing, wherabouts unknown.
At the end of a lecture a woman stood up to say that a report exists in her museum (didn't catch all the details here) of an analysis of the Hexham Heads, and they were indeed made of concrete, not stone. 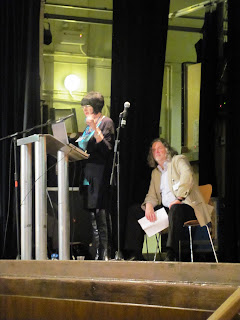 I wasn't sure about this talk. It started well enough with the claim that science wasn't quite the rational exercise that scientists tell us - or that is written in the text books. At least not in the early days anyway. Which I accept perfectly happily, an looked forward to finding out more.

But, it began to dawn on me 15 / 20 minutes into the talk that these people weren't dispassionate, neutral Forteans weighing up the pros and cons of something that appears strange, but were in fact believers in this thing they were talking about, which at that point still hadn't been made clear. I saw that quite a few people were now walking out. I don't know if they were walking out in protest, they may have just seen it as a good chance to go and get a coffee, use the toilet, smoke a fag, etc. But if that was the case, not many came back.

A lot was said about Isaac Newton and his unorthodox religious views, which are decidedly non-scientific, I accept, but then Newton wasn't a scientist, and science as we know it didn't really exist. He was more like an alchemist.

So we got onto Hermeticism and the Hermetic revival around the time of the Renaissance. Copernicus and his sun centric cosmos in 1543, long lost Egyptian documents written by Hermes Trismegistus (thrice great Hermes) , the fact that all the early scientists owed their discoveries to the ancient philosophy.

Pickett gave us the true story of Galileo and dispute with the orthodox church, as she saw it. His support for Heliocentricism was seen as a threat to the church. From their website:

The Hermeticists taught that a wide acceptance of the heliocentric theory would be the trigger for a religious and political revolution. If and when people were allowed to believe that the earth orbits the sun, and not the other way round as they taught, then - to them - all hell would break loose. They could not let this happen, so they threatened Galileo with the usual agonising death of heretics.

Then Prince came on and spoke, and I'll let his argument be described in his own words: 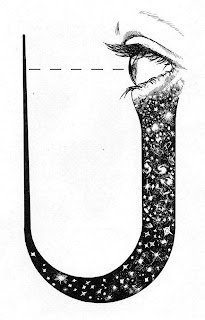 "Part Two of The Forbidden Universe takes the story to the present day, contending that the view of the universe emerging from the latest scientific discoveries, particularly of quantum physics and cosmology, can be seen to vindicate the ancient Hermetic belief in an evolving, living, conscious universe. Far from being merely a historical footnote, Hermeticism hold the key to humanity's future.
There is something else, some great irony and even a cover-up on the part of today's scientific orthodoxy. The fact is that, although staggering to many, science itself has proven beyond doubt that the dazzling array of fine-tunings of the laws of physics and biochemistry that has enabled life to be arise in the universe cannot be ascribed to chance. Therefore, science itself implies the existence of a designer…
However, it must be stressed that while this shows that life has been created and is meaningful, it neither proves the existence of the biblical God nor the truth of the account of creation in Genesis.
Yet totally in denial, scientists have rushed to embrace the totally speculative multiverse theory - which by its very nature can never be proven - rather than admit that they themselves have demonstrated that the universe has been designed. This is not science. This is desperation."

There was mention of theoretical physicist John Archibald Wheeler who speculated about their being a "Participatory Anthropic Principle" in the Universe.

So where do I stand on all this? Buggered if I know, really. It's be tempting to adopt this belief system, especially as it seems to piss Christians off quite so much. Yes, it's a nice idea that agency pressed a button around the time of the Big Bang and started all this going to exact specifications; and impossible to entirely rule out too as we know that given enough time, we too will be designing and creating out own multiple universes. If we can do it, then how can we deny that we may be part of someone else's handy work. Maybe we're aprt of a computer programme?
But then I think, where does it all get us. Isn't it just better to do as the more honest scientists do and admit we just don't know, and maybe we never will. From the Program:
The world should have ended on 21 May this year, according to American radio preacher Harold Camping; or has the Apocalypse been postponed to 2012 as the Mayan Calendar is supposed to suggest? Over history, hundreds of dates have been set for Doomsday and, so far, every prediction has fallen flat on its face. So why do prophets keep prophesying? Why do their followers believe them? And how do failed prophets and disillusioned followers cope with the inevitable ‘disappointment’ of waking up on Judgement Day to find everything as normal? And how is the world supposed to end when it does? Will a wrathful God take to the skies with his angels? Will we be hit by a meteorite or rogue planet? Will the human-race score an own-goal and cause irreversible climate change or blow itself up with nuclear weapons? Ted Harrison explores the history, mythology and psychology of End-time rumours.

I really enjoyed this talk. Made me laugh quite a bit, thought the speaker was excellent. I'm not sure everyone thought it was as amusing as I did - though he was throwing in quite a few jokes, quite dry jokes. My kind of humour I guess.

Guardian on the end of the world

John Martin: Apocalypse
And that's where it ends for me - as I took to the pub to talk to a friend I rarely see.

Gail-Nina Anderson: A Popular History of the Mummy
Nina Conti: Her Master’s Voice